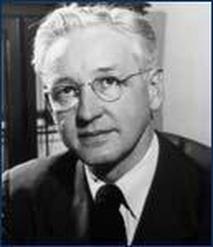 Although born in Bradner, Ohio on June 21, 1902, Nelson Hale Cruikshank spent a good majority of his childhood in Texas as well. With a grain merchant for a father, Cruikshank grew up with an ingrained respect for farmers and the work that they do. After working on Great Lakes freighters and participating in the Seafarers' Union from a young age, Cruikshank attended college at Oberlin College before graduating from Ohio Wesleyan with degrees in economics and theology. Cruikshank's passion to help others through applied Christianity and social reform was fueled when he entered Union Theological Seminary.
Throughout his life, Cruikshank's main goal was to improve conditions for everyone, but especially the elderly and those with disabilities. He held many high positions over the years, allowing him to have a voice and set up key organizations during the labor movement earning a national reputation as a labor's articulate and persuasive spokesman. Mostly because of Cruikshank's work as a lobbyist, Congress passed Social Security Disability Insurance (SSDI) in 1956. SSDI pays money gained from taxes to the disabled. This allows those with disabilities incapable of having a decent job to support themselves, and is one of the most beneficial results of the labor movement. Cruikshank was also a "chief architect" of Medicare, a federal health insurance program for the elderly. Because of Medicare, workers now are able to retire when they get older without worrying so much about supporting themselves. Previously, laborers were forced to literally work themselves to death, never quitting their job unless they were physically unable to work, for fear of starvation. With Medicare in effect, worker conditions were drastically improved, and Cruikshank died with his life dreams achieved, which are still in effect today.
Powered by